For some time now I wanted to learn Rust, but I either didn’t have the time or couldn’t come up with a nice beginner project. Given that I recently found myself to be without a job and we had another lockdown in the part of the world I happen to live in, I decided to give that idea another go (no pun intended).

There is apparently a trend to reimplement existing Unix tools in Rust (see exa, a ‘modern replacement for ls’, delta, a syntax highlighting pager for git, diff and grep output, bat, a ‘cat clone with wings’, zellij, a terminal workspace, ripgrep, a line-oriented search tool …). I looked around what else was out there, but what I wasn’t able to find was an implementation of cal(1) in Rust (maybe I wasn’t looking hard enough, feel free to point anything out to me I might have overlooked). No cal in Rust even though a calendar implementation would provide the potential to go over the top with terminal colors, which is also very important when writing reimplementations of older CLI tools! So I started writing and soon had a simple prototype of a cal reimplementation. A couple of weeks later I can now present carl, a cal implementation in Rust: 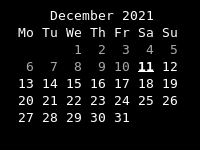 The default output of carl is what you would expect from a commandline calendar tool. It prints the days of the current month and highlights the current day. Other than the cal tools I tried, carl by default also prints days that are in the past in grey. Like cal it can also print three month if you use the -3 switch or the whole year if you use the -y switch. 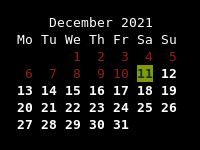 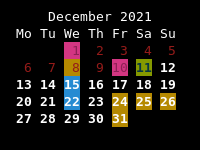 Using the --agenda commandline switch carl also shows an agenda of dates from the ical files.

I have uploaded carl to crates.io, so you can install carl using cargo: cargo install carl. I also plan to upload it to Debian at some point. If you find bugs or have feature requests, please don’t hesitate to create issues.