Sometimes I play around with Tails and on rare occasions I also build a Tails image myself. One thing that makes the build of Tails a bit tedious is that it a also builds the Tails Website, which contains the whole documentation (which is really cool, because that way users have the most up to date documentation on their desktop!). The problem is, that the website takes a looooong time to build- on my Laptop (i7-5600U) it takes around 11 minutes.

I was curious if it was possible to convert the whole website, which is based on ikiwiki, to the hugo static site generator which is known to be pretty fast ("with its amazing speed and flexibility, Hugo makes building websites fun again" as the hugo website puts it ;)). I did some research if there was some tooling to do so- the Hugo website lists some migration tools but nothing for ikiwiki, but I stumbled upon anarcat’s conversion notes which has a lot of information and also links to the write up jak did on his conversion. Anarcat also published a python script to convert ikiwiki to hugo which I tried, but there were some important parts missing. As it happened I also had to prepare for an exam at that time and I am a bit of a procrastinator, so I started adapting the script for the Tails wiki and then rewrote some parts and now its just another ikiwiki2hugo script:

What does it do?

For every ikiwiki *.mdwn or *.html file, it creates a Markdown file with hugo frontmatter. The information for the hugo frontmatter comes from parsing the [[!meta directives in the files.

What does it not do?

There are a lot of directives whose replacements are not implemented. Most important probably the [[!inline directive with multiple (and negative) arguments and the [[!map directive.

Also, Hugo is more strict regarding Markdown syntax. It does not convert markdown syntax that is embedded in <div>...</div> and other block-level elements.

Disclaimer: This comparison only looks at the build time- there is a lot of functionality of ikiwiki that hugo does not provide, for example the possibility to edit websites through the browser, which is used for the Tails blueprints. Another feature are the traillink directives which i simple replaced by normal markdown links.

Anarcat also provides a nice oneliner to check which directives are used in the ikiwiki repository:

Before running the script (I’ve removed listings of directives that occure less than 100 times):

(I think the immagine is a typo in a translation; I also found a couple of other typos which are fixed now; the tails_ticket directive is a code-quote from the release process document and the tails_gitweb is the one occurence of this directive which lists the description before the path ;))

Finally, a screeshot of the Tails website built with hugo- it looks pretty broken. Most of the syntax that does not work is because its embedded in HTML tags. Apparently hugo thinks about switching to another markdown renderer, so that could make a conversion from systems with a lot of mixed HTML/Markdown code easier. 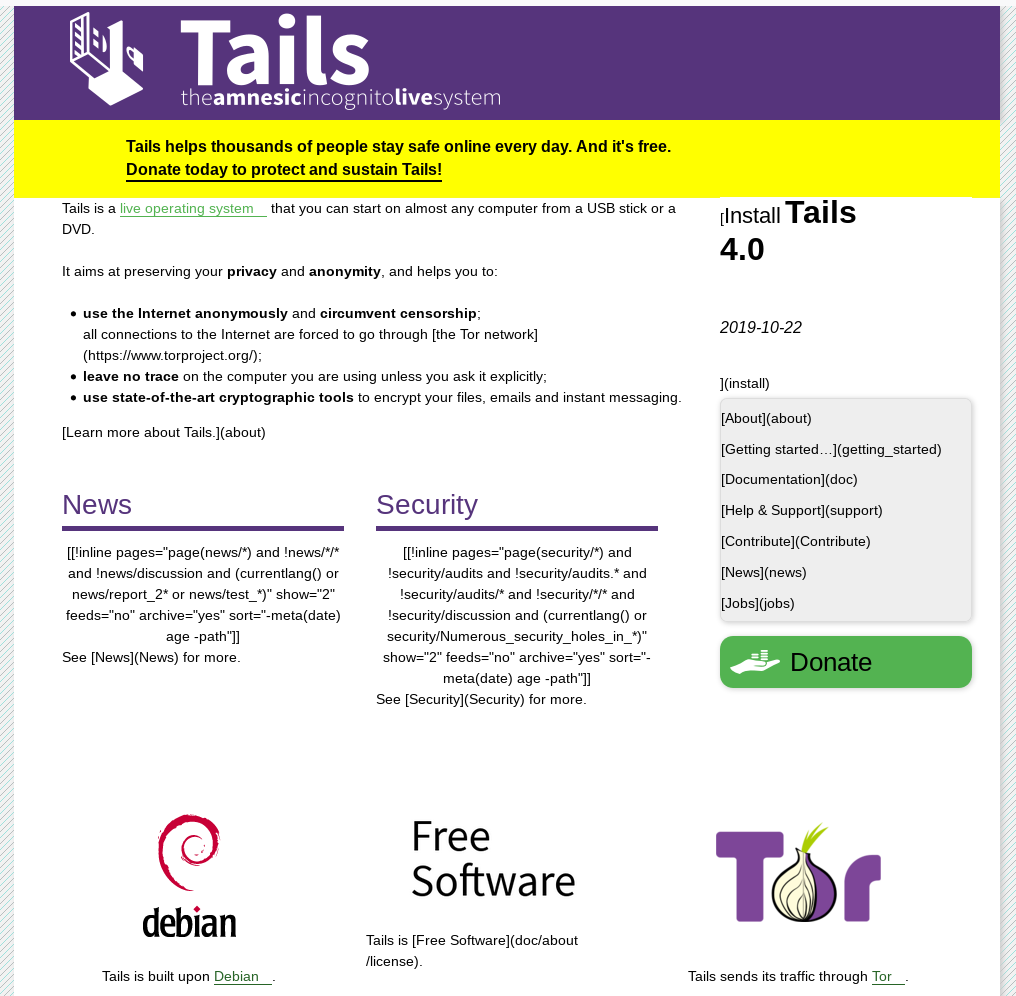